Bankruptcy Matters Are Not State Matters

Questions about bankruptcies are often framed as,  “How many bankruptcies were filed in e.g. (my State)?" It may not be entirely correct to assume that either a state or a state court system is making bankruptcy cases publicly available.

Bankruptcy laws also protect troubled businesses and provide for orderly distributions to business creditors through reorganization or liquidation. These procedures are covered under Title 11 of the United States Code (the Bankruptcy Code). The vast majority of cases are filed under the three main chapters of the Bankruptcy Code, which are Chapter 7, Chapter 11, and Chapter 13.

Sections of the U.S. Bankruptcy Code which may be applicable are: 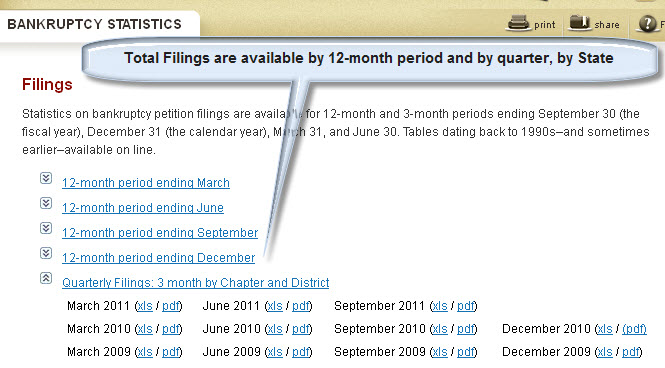 U.S. Courts Statistics: This section of uscourts.gov provides statistical data on the business of the federal Judiciary. Specific publications address the work of the appellate, district, and bankruptcy courts; the probation and pretrial services systems; and other components of the U.S. courts. The links on the left (side of the page) will take you to a summary of content as well as the current reports and those dating back several years.

Judicial Business of the U.S. Courts is the most comprehensive set of detailed statistical tables published on the work of the federal Judiciary, plus charts and text explaining why increases or decreases occurred in the courts’ caseload.